Sarah Carne’s new project, ‘You are Welcome’ at Tate Exchange 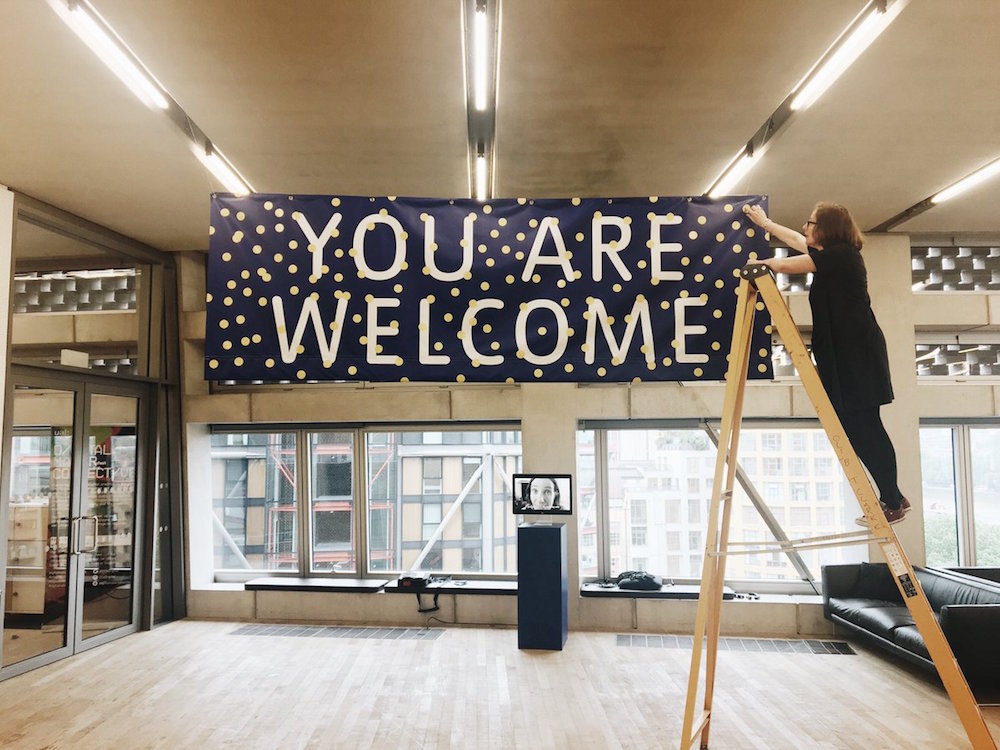 You are Welcome is a 4 week participatory event at Tate Exchange, Tate Modern Thursday – Sunday 12.00 – 18.00 devised by artist Sarah Carne

I was invited to curate Tate Exchange* as a space for the audience to reflect on ideas explored there during previous programming but I knew it also had to be accessible for first time visitors and those who wouldn’t be able to visit in person. I also rapidly understood I’d need to consider how the floor works within Tate as an organisation as I wanted the front of house teams to feel confident about what they were communicating about how and why people might make the extra effort to go beyond the galleries to Level 5 of the new building. 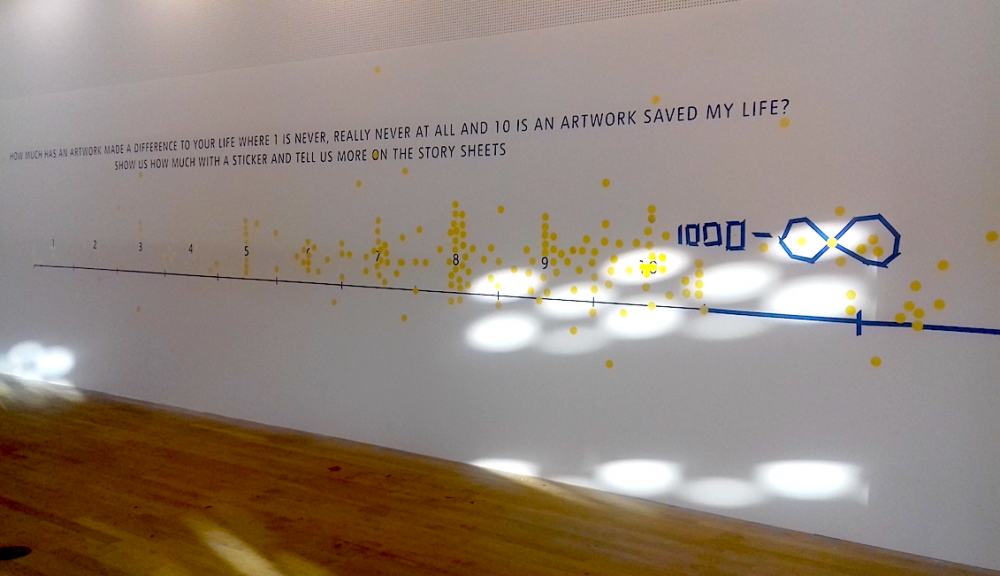 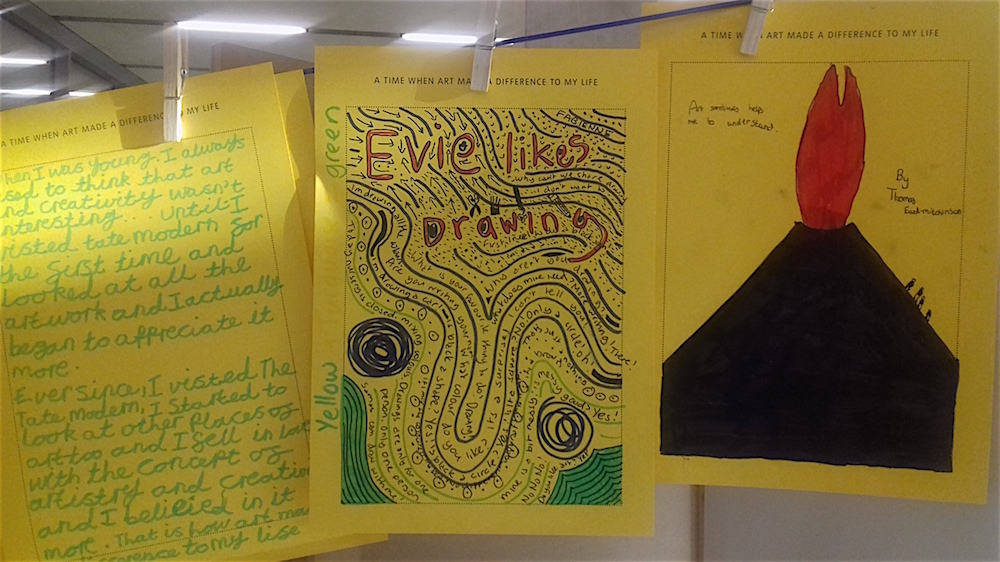 My practice frequently involves institutions and conversations with those who are within them or withheld from them so I started this project by talking to people across Tate and beyond about how best they thought such a space might work and what might prevent people from engaging with it. I’m interested in how we access places of privilege, whether that is an archive in a college or a difficult to reach floor and idea. I’m also interested in confidence – how it is generated, manifested, maintained or lost and this became an underlying thread in howYou are Welcome would need be related.

My solution as to how visitors might be enticed to come was to hand the floor over to them with the invitation to contribute their experiences and ideas and the understanding that the Tate Exchange team would commit to listening, responding and be open to the possibility of ideas influencing future programming. 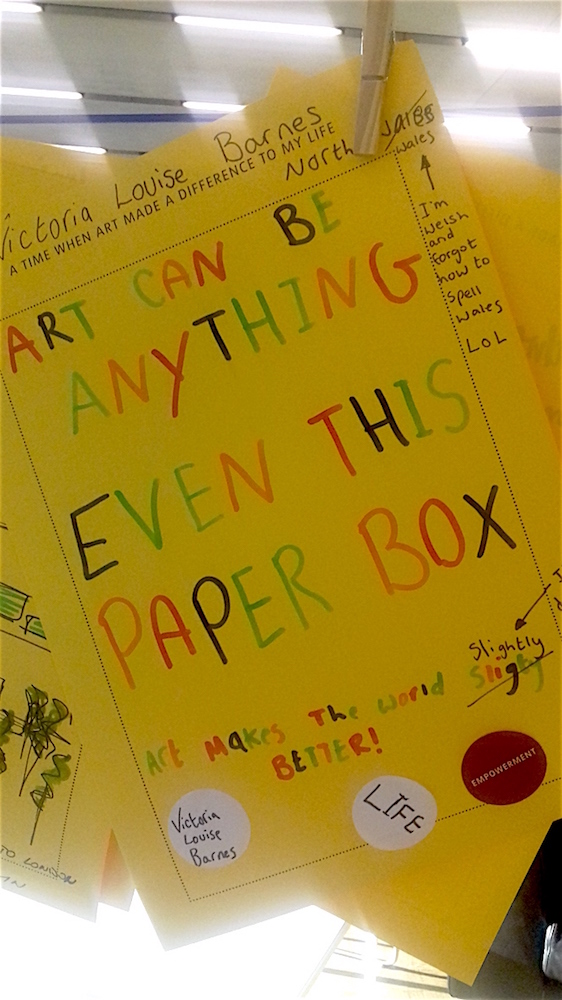 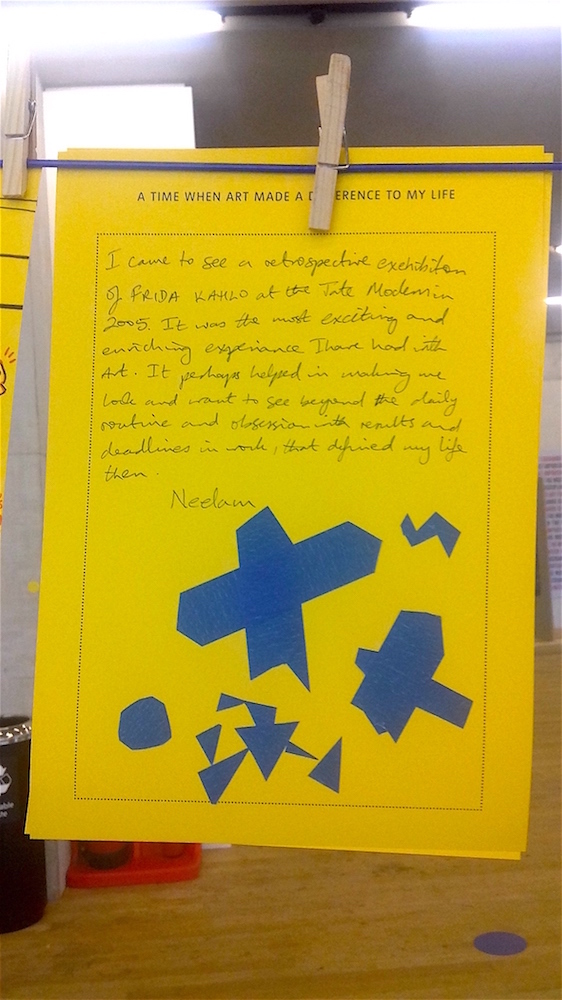 The central question, therefore, being asked for the four weeks is how can art make a difference to people’s lives and society? Tell us what you think. It is being asked on vinyls next to artworks in both Tate Modern and Tate Britain, on maps and wayfaring, on postcards handed out by Tate Hosts and staff, on badges, online and on the always useful back of toilet doors.

Once a visitor reaches the space they are met by a Welcome sign translated into over 40 languages by Tate staff from all 4 sites and an invitation to tell a story about a time when art made a difference. This can be drawn, written, contributed to a sound wall, mapped on the world and voted about on a twenty foot wall.Most importantly it can also be contributed online here

The design of the project by the wonderful Monica Oliveira of Tate Design Studio consists of hundreds of stickers applied by hand across all elements, directling referencing the pamphlet I’m Looking for Barbara, itself a design of beauty by Charlie Abbott of work-form. Along with a video you can see here the pamphlet was commissioned by Floating World for Unfolding the Archive. This use of stickers encompasses a range of ideas about individual action, democracy of materials and the social metrics of value that I’m exploring throughout my work and was originally a response to the use of them as an idiosyncratic replacement for the Dewey Decimal System at the Feminist Library.

One of the key catalysts for the theme behind You are Welcome was the post brexit signs that appeared stating Always Welcome and in line with this I’m also exhibiting This is a Public Service Announcement: Good Morning one of 8 videos that originally appeared as interventions on the public information screens at the Royal Festival Hall commissioned by People United and the Southbank Centre. In it I say good morning in multiple languages and acknowledge a mono-culturalism in my practice at odds with the visitors to the space and my professed aim to widen access and highlight gaps where people’s contributions are missing. You are Welcome continues my attempt to address this. As a thank you for their contribution visitors can take away with them a badge that says Good Morning in languages including Somalian and Polish.

You are Welcome is open until Sunday 11th June.

*Tate Exchange opened in September 2016 as a space to explore ideas around art, society and effect and is programmed by Learning curators and Tate Exchange Associates who range from charities and universities to healthcare trusts and community radio stations working within and beyond the arts.

You can follow any responses to this entry through the RSS 2.0 feed.