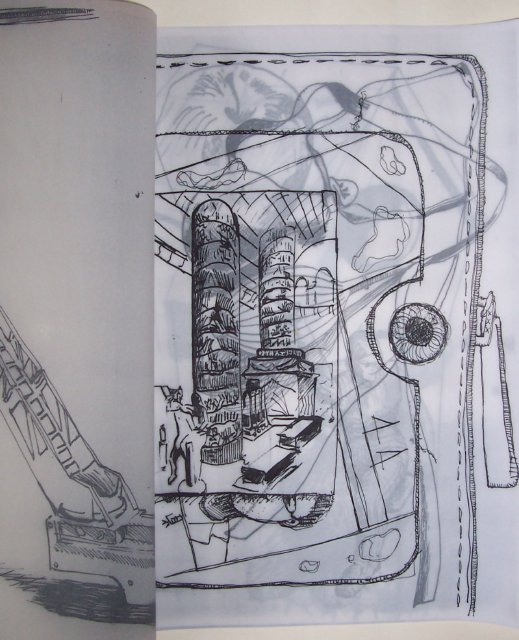 The collaboration between Hide Ishibashi and Andy Parsons began while Hide was still living and working in London.The idea of showing in Tokyo was first discussed in 1998 and the first show at Gallery Sudo in Roppongi took place in 1999. The success of this first joint exhibition helped to reinforce the idea of developing a constant exchange of ideas and a rolling programme of shows in London and Japan. The next show was Chu Hi and Chips at the APT Gallery in London in 2000, then back in Japan Hide brought together an even wider range of work with Sarah Carne and Kwong Lee joining in for a show at Gallery Sudo. The natural progression form this was to make collaborative work that actually featured as one of its defining features the idea of geographic separation. The most recent show of collaboratively made work called “Drawing Between” was in Tokyo at Gallery MAKI in March 2005 and the body of work the artists have produced together now includes three 30 ft long scroll pieces as well as two books.

All the work for “Drawing Between” is the result of postal swaps of partially complete works on paper. Each artist posts a portfolio of works on paper to the other, these include prints of various types, found elements, ink, pastels etc. The works are treated in any way the other artist chooses. The result is a fascinating visual conversation involving spontaneous improvisations as well as meticulously planned interventions. The artists are careful to not try to second guess the next steps their drawings might prompt in order to keep the sense of spontaneity in the whole process. The works take a physical and metaphorical journey and are the result of a combination of the cultural influences and different sensibilities of the artists.