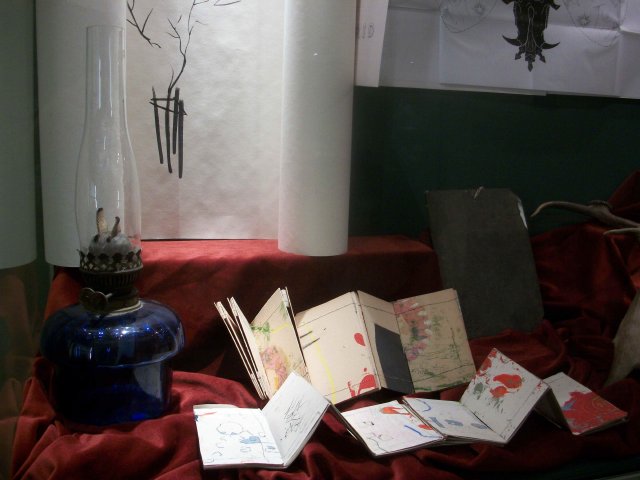 In Autumn 2010 Floating World created two site specific installations at Fermanagh County Museum in Enniskillen.  The installations displayed works by members of the public alongside works by Floating World artists. Floating World is a group of artists who make books. The artists, who come from Ireland, England and Japan, have made and exhibited works in different venues, from the foyer of Enniskillen Town Hall to Tate Britain. The aim of the group is to use the book medium to express their ideas to as broad an audience as possible.  The installations displayed work by members of the public alongside works by Floating World artists. In the run up to the show I worked with members of the public to make artists books onsite at the museum, and at the ‘Book House’ in Cavan. This part of the project aimed to provide everyone with a voice to relate ideas, share images, thoughts, insights and memories.  The projects aim was to involve young and old alike, and find ways for them to communicate through the medium that are not determined by pre-existing skills or levels of technological know how.  The works were displayed in two areas. In the main part of the Museum Floating World partly repopulated one of the giant display cases with Artists books. The display case previously displayed objects illustrating the history of photography in Enniskillen. The idea of including artists books in this context was based on simple things, like the similarity between the equipment used by book binders and early photographers, and more complex ideas about reproduction, memory and identity.  Amongst the works occupying the case, were new works by Sarah Carne, who created a number of books based on the I-Spy Series. The books mimic the originals in style but replace the familiar content with new narratives.  The idea of re-framing something that already exists, to change and create a new thought for it, is the common denominator for both the books and the method of display.

The second area where Floating World created an installation was the19th Century Powder Magazine. The installation took as its inspiration two historical figures in the courtyard of the castle, which are similar to the life size cutout figures that you stick your head through at the seaside. The Magazine was filled with these life size figures, holding aloft books for the visitor to pick up and flick through, creating a dramatic and visually arresting backdrop to the books.