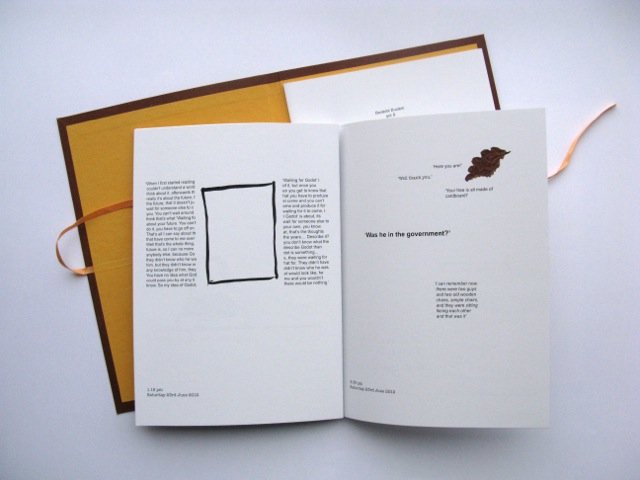 Andy Parsons and Glenn Holman’s book ‘Beckett Bucket’ was  selected from the Artist Book Collection at UWE in Bristol to be part of the RUKssian Artist Book Exhibition in Moscow. Curated in the UK by Sarah Bodman and in Russia by Vasily Vlasov, Viktor Lukin and Mikhail Pogarsky from the International Association “Kniga Khudozhnika”, the exhibition sets out to showcases the works by leading artists in the field of artists books from Ireland, the United Kingdom and Russia, with the hope that the exhibition will extend interest in the artist’s book both in the countries and provide a platform for artists will to communicate and exchange ideas with each other.

‘Beckett Bucket’ was created by asking members of the public for their insights and anecdotes about Samuel Beckett and then transcribing them as text and drawing on the spot, creating a book as a performance. Andy Parsons and Glenn Holman of Floating World created Beckett Bucket as part of ‘Happy Days’ the first International Samuel Beckett Festival held in Enniskillen in 2012. Parsons and Holman made the book in collaboration with the public whilst sitting in their own Beckett inspired temporary installation complete with tree, bench, signs, cardboard Beckett and of course, a bucket. The book itself is structured part as a timeline and also mimics the structure of a theatre script. It charts the activity of recording information from the public and is as true a reflection of what the public said as possible. Some of these responses were fleeting and partial, some of no direct relevance to the Beckett. All were recorded with as much fidelity as those of Beckett aficionados. As such it is a true compendium of peoples responses to Beckett’s work …. A Beckett Bucket.

Beckett Bucket is now in a number of major collections including the Tate, University of Cork and it was recently exhibited in the Sheffield International Artist Book Prize.